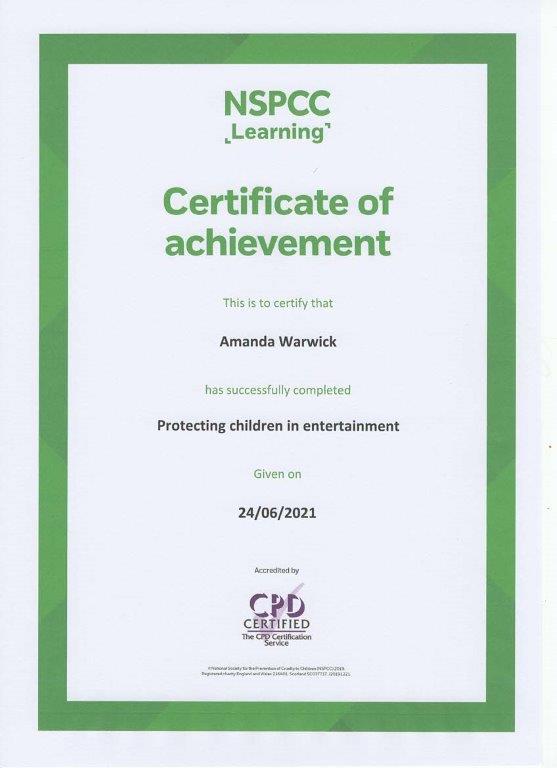 The function of the organisation ‘Amanda Warwick Dance Arts’ is to provide a safe area in which children and adults are taught the skill of dancing and associated performance techniques with a basic understanding of physiology, in order to avoid injury and to train and strengthen the body correctly.

Amanda Warwick Dance Arts carries Public Liability Insurance which will cover your child whilst in our care.

Teachers and assistants are Enhanced CRB Police checked for security purposes. Most assistants are also council registered chaperones and have been trained in the RAD and ISTD syllabi. The majority of teaching is carried out by Ms Warwick herself or by pupils and graduates whom she has trained.

Teachers will be fully qualified, and student training teachers or guest lecturers will be supervised by a teacher or a council registered chaperone. The space that the children occupy at the venues will be checked for dangerous objects to the best of our ability.

The safety of the building is the sole responsibility of the hall owners themselves.

Pupils will not be released from our care without being escorted to the person whom we know will be collecting them. They will be supervised at all times but we cannot be held responsible for older children who refuse to comply with these rules.

Late pick-ups:  We will continue to care for any pupil whose parents have been delayed. If someone else needs to collect a child unexpectedly then the regular guardian must telephone, giving permission to release the pupil to the adult concerned.  Classroom phone No . . . 07788 655302

Pupil responsibility:  Parents are responsible for all aspects of the pupil’s attendance, including payment and dress conduct, until the pupil is eighteen years old. If a pupil is absent it is the responsibility of the parent to make sure that enquiries are made about timetable changes and work missed during that absence.

Changing facilities:  Sufficient changing areas are available for boys to dress in another room from the girls.  Fathers should not attend dressing rooms, but where dancers change near the external door they must be aware that their personal changing should be done in the ladies or gents rest room. Should pupils wish to dress together we will not prevent them but we will supervise them in order to maintain decency.

Lost property:  The loss of items at the school is at the parents own risk. We will endeavour to find missing objects if they are named. Lost property will usually be left at the venue for collection from the lost property point.

Photographs and video:  The school reserves the right to photograph and video pupils for training purposes and for promotion of the school. Lessons and shows may not be filmed by parents, unless within a small group destined for examinations and then by consent of the other pupils and parents. Official DVD’s are produced following performances. Parents not wishing for the photograph to be used, or children who object, must inform us. Children will not be named in publicity unless they have received a public accolade, which by the very nature will mean that their parent has been willing for them to participate.

PLEASE NOTE: That it is increasingly necessary to submit a security photograph for trips, public events and examinations. We reserve the right to retain a passport type picture of each pupil for their own safety in these matters.

Pupil Relations:  We encourage an ‘open discussion’ policy and bullying has been rare. We reserve the right to withdraw children from the working area if their behaviour becomes so excitable that they are hindering other children in their enjoyment and safety. This measure is generally only needed for a few minutes. Anything more serious would be discussed with the parents but without compromising the child’s trust. As council-registered matrons, we follow the guidelines in the Child Employment booklet, set down by the Guildford Child Employment Office. In the unlikely event that a serious case of a ‘child at risk’ should arise, a local child welfare officer would attend.

If your child discloses a family secret, or is openly discussing something that would not involve a welfare officer being called, then the teacher concerned must be able to alert those parents as to the situation.

When joining Amanda Warwick Dance Arts, we will need to store some of your details.

Parents of pupils under 18, or pupils 18 years and over, will be asked if we can keep a record of  the following:  Name, home & e-mail addresses, contact phone numbers, your dance experience and any relevant health issues likely to affect tuition and pastoral care.                  These registration details will be taken from a form which you will be asked to fill in. You will be given a carbon copy of this form to retain and a copy of your agreement with us to keep your data. Your details will be securely saved on our computer and will be available for you to be viewed by means of e-mail.  Your financial details will become known by us if you pay your fees by Internet banking or by cheque.  These details will be stored in our computer accounting database.  They are also available for you and serve as a receipt when requested.

In some cases, a record of any illness, injury or welfare issue which may need special care must be retained at AWDA.  Depending on the activity, we may need to keep a note of which educational school your child attends.  We also need contact details of anyone other than you who may be collecting or dropping off your child to classes. It is also advisable to offer contact details in case you, as a parent, are unwell, and we need to make contact with an additional family member/responsible friend.

There may be times when we need to pass on your identification data (electronically) to an examination board, or the Child Employment Office, in the case of theatre performances. Educationally, children with be given unique learner numbers and entry pin numbers which the dance teacher and the dance societies will retain.  Parents should also retain these.  We will need your agreement to pass on the relevant details to organisations who deal with academic matters.  This usually refers to children but could include adults.  These details would be your name, date of birth, qualifications in that genre to date. General ethnicity of exam candidates is also requested but it is not mandatory to oblige.                                                                              Candidates must be willing to show photographic ID at  exam venues.  We do ask to retain your child’s image for security purposes or include it in publicity.  Advertising/our website  would contain no personal data, except if a participant has achieved something which a parents may be wish to put in the public eye.  We do not send ’whole school’ e-mails but may need to contact participants in a small group if pupils are engaging in, or we are informing of a shared activity. You must tell us if you are not in agreement with this.

What happens when I stop lessons?   After a  period of  two terms, we will contact  you and ask if you wish us to destroy your data, which we will  do by deletion and shredding of your forms. Any original enquiry forms taken from our website are deleted once the client has registered, declined lessons or have not responded. Children’s medical references (long-term situations) may need to be retained under the child welfare rules, until they are 21 years of age (subject to change).

Friends of AWDA:  If you would like to stay in touch after moving on, please e-mail us with a short message to that effect.

Breach of security:  Should data be taken without permission from our system, we will inform you as soon as we become aware of this and keep you updated on our plans to contain or rectify the breach. 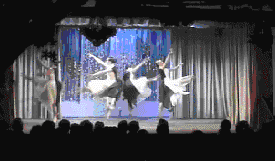